Unless you’ve been ignoring any and all food-related news over the past few years, you’ve probably heard about the ketogenic — or keto — diet. But unless you’ve studied it or tried it yourself, you may not be aware that it’s not simply another low-carb weight-loss plan.

The keto diet can lead to rapid weight loss, it’s true, but it’s very challenging to stick to. It also comes with a number of risks ranging from potential liver problems to bad breath (which is so common, it’s nicknamed “keto breath”). Before you toss out every grain in your house, make sure you know what’s involved as well as what to watch out for if you choose to go keto.

How the Keto Diet Got Its Start

Although the ketogenic diet is popularly touted as a path to quick weight loss, it was initially introduced in the 1920s as a treatment for epilepsy. Fasting had been used as a treatment for epilepsy since at least 500 B.C., when it was recorded in the Hippocratic collection. It was even documented as a treatment for seizures in the King James Bible. Although the idea of treating epilepsy with dietary changes has a tremendous amount of history, it wasn’t until 1921 that doctors realized a ketone-producing diet containing a four-to-one ratio of fat to protein and carbs could mimic the benefits of fasting for people with epilepsy. This diet, called the ketogenic diet, was widely used in the 1920s and 1930s, but fell out of use after discoveries and advances were made in antiepileptic drugs in 1938. It wasn’t until Dateline NBC aired a program in 1994 about a 2-year-old boy with severe epilepsy who’d become seizure-free after going on the ketogenic diet that it once again increased in popularity.

While the focus was still on the diet’s anti-epilepsy benefits rather than weight loss, the timing coincided with the wild popularity of the Atkins diet, a weight-loss program that similarly restricted carbs. This led researchers to look into what keto might be able to offer to non-epileptic individuals, including people with other neurological conditions such as autism and Alzheimer’s disease, as well as those who wanted to lose weight.

Benefits and Risks of Keto

Weight loss in the keto diet is achieved by restricting carbohydrates and protein, forcing the body to use ketone bodies (fuel produced from stored fat by the liver) instead of sugar (from carbs). This is why a specific ratio is necessary. To successfully achieve ketosis, whereby fat provides most of the fuel for the body, a person must cut out a significant amount of carbohydrates — including carbs from fruits and vegetables. On top of that, eating too much protein can interfere with ketosis, and it generally takes a few days to reach ketosis. If you really want to live that keto life, you need to be ready to truly commit.

The weight-loss-focused approach to the keto diet is a bit less extreme than the original 90 percent fat version, with the macros coming in at 55 to 60 percent fat, 30 to 35 percent protein, and 5 to 10 percent carbohydrates. That’s still far more restrictive, especially when it comes to carbs, than what you’ll find in the typical American diet, which generally works out to around 35 percent fat, 16 percent protein, and 47 percent carbohydrates (though percentages vary based on sex, age, and other factors). Not only is a diet consisting of such a high-fat ratio difficult to sustain, but it also tends to be full of red meat as well as fatty and salty processed foods.

So why do it? People love a quick fix, and accelerated weight loss is frequently seen in the short term for those on the keto diet. However, any difference in weight loss between the keto diet and more moderate, traditional low-fat diets or a Mediterranean diet appears to go away over time. It’s also worth noting that little is known about the keto diet’s long-term (beyond two years) effects. And because it’s difficult to follow for a long period, keto falls in the “yo-yo diet” category for many people — and the rapid weight loss fluctuation associated with these diets is also associated with increased mortality. Other more specific risks to going keto include nutrient deficiency, liver problems, kidney problems, and constipation, as well as fuzzy thinking, mood swings, and keto breath. Some people experience short-term side effects including nausea, vomiting, fatigue, insomnia, and difficulty with exercise tolerance, which is sometimes referred to as “keto flu.”

Some experts suggest using the keto diet only for a short amount of time to kick start weight loss before transitioning into a diet like the Mediterranean diet, which research suggests is a healthier alternative for long-term weight loss and maintenance.

What to Eat on Keto (and What to Avoid)

Sticking to the keto diet isn’t only challenging due to hunger, cravings, and the aforementioned side effects — although, as with any dietary change, those can be a factor. Building a proper keto meal plan requires time and attention to detail because it’s individualized to each person’s body weight, with carbohydrates limited to between 20 and 50 grams daily and protein limited to 1 gram per pound of body weight (or 1.5 grams per pound if the person is engaging in heavy weight training exercise). Fat and overall calories are not restricted. Many calculators exist to help determine your macros and create a meal plan, although it may be wise to work with a registered dietitian with keto diet experience at first. 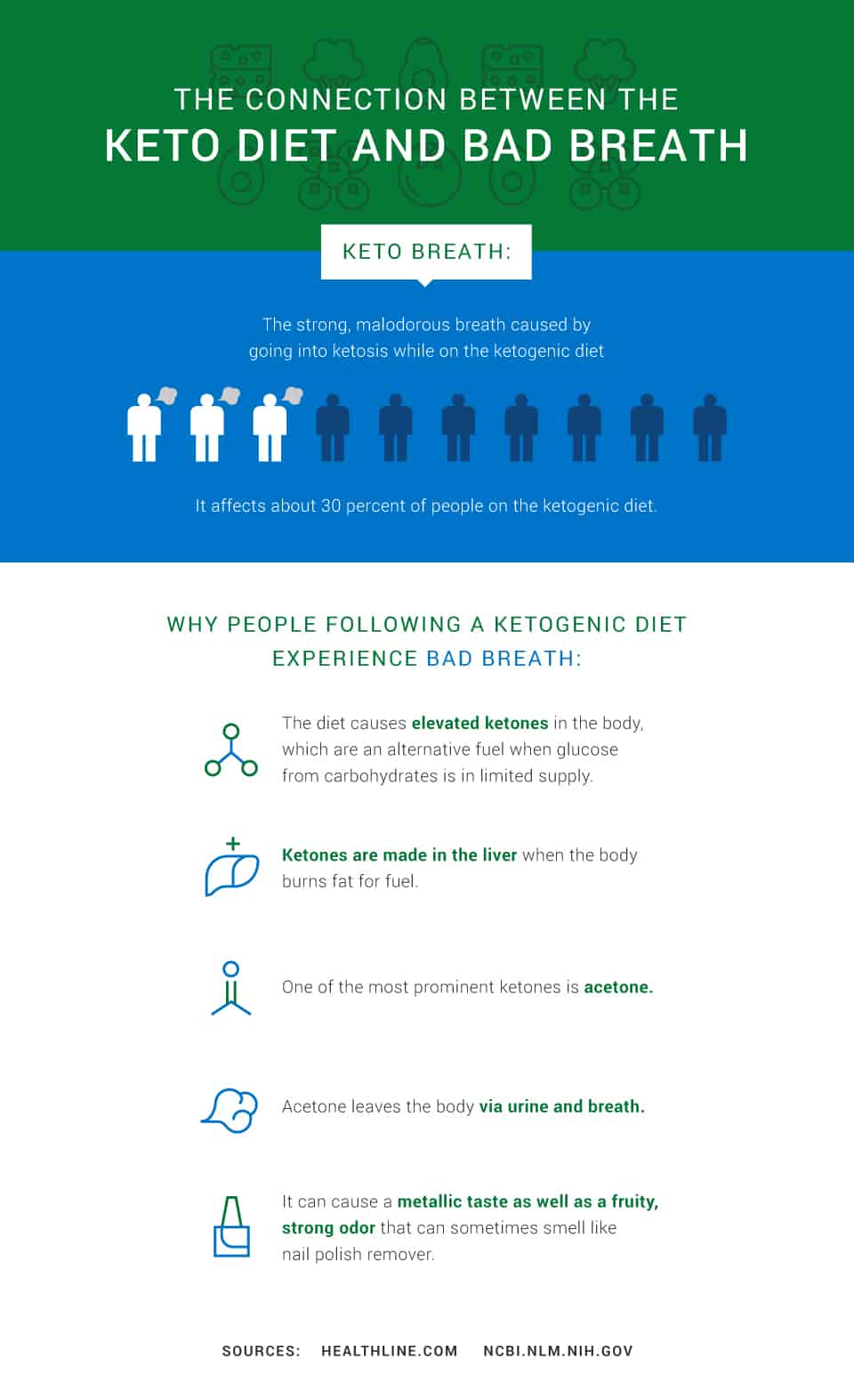 Why the Keto Diet Affects Breath

Elevated ketones — specifically, acetone — is the reason people following a ketogenic diet often experience bad breath. Acetone exits the body in two ways, urine and breath, and when the body achieves ketosis, it’s common to notice a change to the breath that’s different than ordinary bad breath. It may have a metallic taste as well as a fruity or otherwise strong, unpleasant odor; some describe it as being similar to nail polish remover, which makes sense given that acetone is one of the main ingredients in it.

Keto breath affects about 30 percent of people on the ketogenic diet according to one study, and is often noticed within a few days or maybe a week of starting your keto journey. While bad breath is never exactly welcome, there’s good news: Keto breath indicates you’ve entered ketosis — although, since not everyone experiences it, don’t rely on that as your only indication. 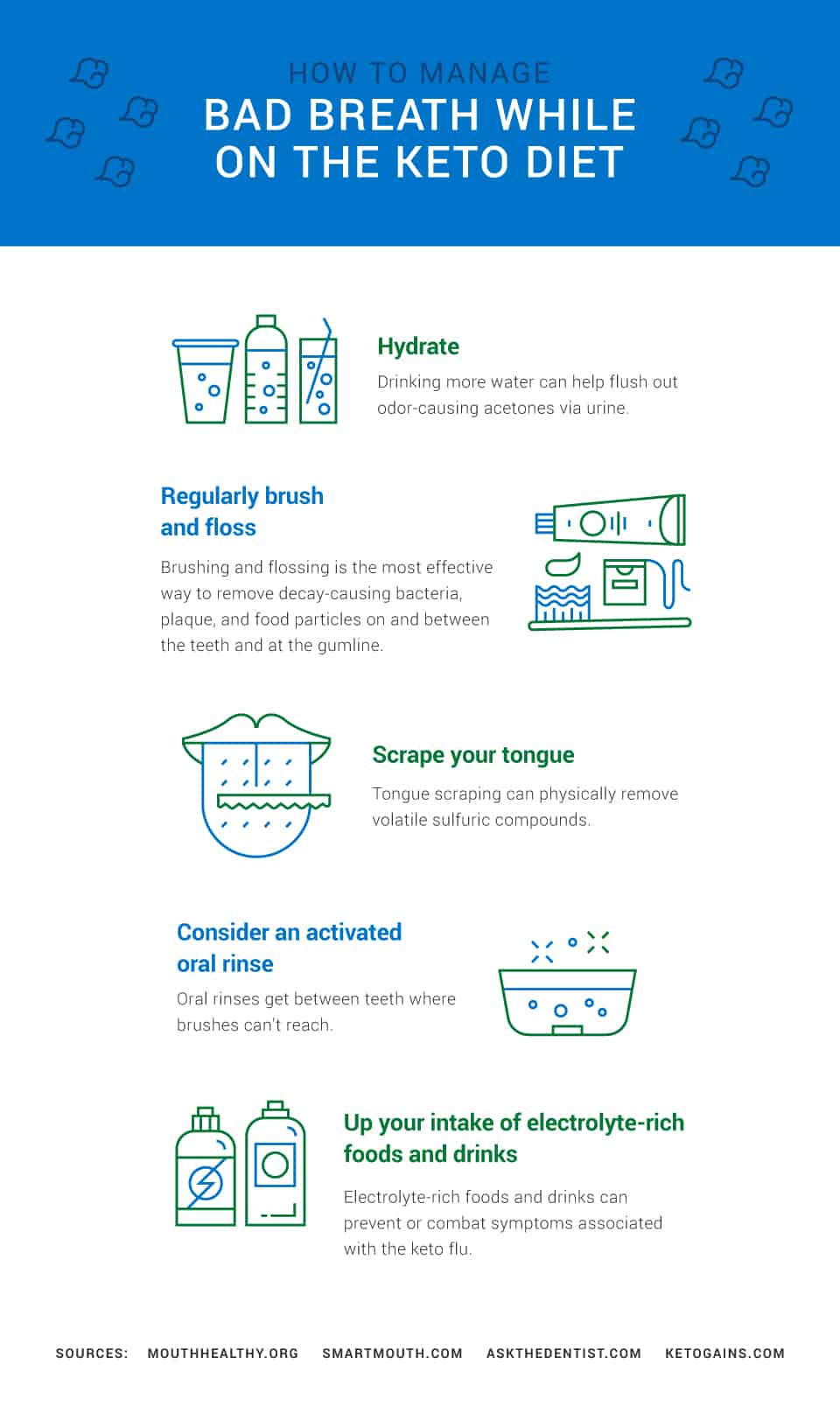 How to Manage Bad Breath While on the Keto Diet

While you may not be able to avoid keto breath entirely, taking any of these actions can help you keep it at bay.

If you decide to embark on the ketogenic diet, make sure you understand what’s required and read up on the risks. Then take steps to create and follow a structured meal plan, making sure you don’t miss out on key nutrients, including electrolytes. Be aware that you may still experience some temporary side effects. If you opt to stick with the keto diet for the long term, be sure to discuss it with a medical professional to ensure you maintain your health along with your weight loss goals.