If your toothbrush looks pink after you brush or you see blood on your dental floss, you’re not alone. What do bleeding gums mean? Unfortunately, they can be a strong indication of periodontal disease. The word periodontal refers to the structures around and supporting the teeth. Periodontal disease is also called gum disease. Gum disease is a serious health problem, with around 64.7 million people in the U.S. having symptoms. However, people may not notice it for years because the symptoms are subtle in the initial stages.

It’s not a good idea to ignore signs of gum disease, one of which is bleeding gums. Untreated periodontal problems can lead to tooth loss and have a negative impact on overall health. Keep reading to understand what causes bleeding gums and learn how to prevent and treat them.

The most common causes of bleeding gums include the following.

The primary cause of bleeding gums is the buildup of plaque along the gum line. Plaque is a very thin, sticky film loaded with bacteria that are thriving in that sticky layer of salivary proteins and food particles. When you brush your teeth, you scrub off this plaque layer. But after a few hours, dental plaque starts forming on your teeth again. Hence, dentists advise you to brush your teeth once every twelve hours, or twice a day.

Hardened dental plaque is called tartar. It firmly binds to the teeth and you can’t remove it by brushing alone. You need professional dental cleaning for tartar removal.

The bacteria present in plaque irritate the gums and cause inflammation. Inflamed gums bleed easily even while you’re brushing your teeth.

While brushing your teeth, it is important to engage the bristles of the toothbrush correctly as we’ll explain below. Improper or vigorous brushing of teeth can injure the gums and scrape off the enamel layer over time.

While inserting the floss between teeth, don’t apply force strong enough to cut and bleed your gums. Repeated bruising of gums through forceful flossing can do more harm than good and even lead to gum recession.

Irritation from dentures or orthodontic appliances

Occasionally, worn-out dentures or orthodontic appliances may have sharp or rough metal ends that can cause inflamed gums.

Bleeding disorders such as leukemia and hemophilia can cause the gums to bleed.

The changes in hormone levels during pregnancy can alter the way the body responds to bacteria. Therefore, women become more prone to gum disease and bleeding of the gums during pregnancy. This condition is called pregnancy gingivitis, and it usually becomes significant during the second trimester. Some women develop swellings on their gums around the premolar region called pregnancy tumors. Pregnancy gum problems are usually self-resolving and harmless.

Vitamin C is an antioxidant that can slow down the progress of several diseases. A deficiency of vitamin C can cause a disease called scurvy. Its symptoms include red and swollen gums that bleed on the slightest provocation. Vitamin K is another essential nutrient and helps in blood clotting. Hence, the deficiency of vitamin K can cause the gums to bleed.

How to Stop Bleeding Gums

You can treat bleeding gums by determining the cause and eliminating it. Here are some ways to stop bleeding gums.

A periodontal exam involves a thorough check-up of the periodontal components that support your teeth, such as your gums and jawbone. A gum specialist will check the extent of plaque and tartar present on your teeth and gums. Then they will prepare and discuss a treatment plan with you. If the plaque or tartar extends beneath the gums onto the roots of the teeth, they will advise a deep cleaning of the roots. Otherwise, they’ll recommend professional dental cleaning.

Smoking has a profound impact on oral health and plays a major role in the development of heart disease and certain cancers. Smoking alters the immune responses of the body and makes you more susceptible to inflammation. Tobacco contains toxins that interfere with the absorption of nutrients into the gums, leading to gum inflammation. For the health of your mouth, you should avoid tobacco in all its forms.

Take supplements if your doctor diagnoses you with a vitamin deficiency

Your doctor may prescribe vitamin and mineral supplements if you need them in addition to your oral hygiene routine.

Bleeding gums can be a side effect of some medications, such as blood thinners. Ask your doctor if your medicines may be causing your gums to bleed. If your doctor suspects one may be to blame, find out if a suitable alternative is available.

Use an oral irrigation device at a low setting

Show your dentist and hygienist how you floss and brush

If your dental team sees problems with the way you care for your teeth, they’ll demonstrate the correct way to do it. Learning the right brushing and flossing techniques can save you from a lot of future dental problems.

Can You Stop Bleeding Gums Naturally?

A healthy diet with a good balance of minerals and vitamins can help stop bleeding of the gums. Foods rich in vitamin C such as broccoli, strawberries, bell peppers, and potatoes can strengthen your gums naturally by increasing the levels of vitamin C in your body. Similarly, vitamin K-rich foods such as kale, lettuce, and soybeans can help keep your blood clotting mechanism normal.

If gum bleeding persists, contact your dentist for an evaluation. Untreated gum problems can become severe and may eventually lead to tooth loss.

For occasional gum bleeding caused by brushing or flossing too hard or other temporary issues, try the following at-home remedies.

Icing the affected area for a few minutes can reduce the blood flow and decrease inflammation in the area.

Warm salt water is an excellent remedy for gum problems. Prepare it by adding half a teaspoon of salt to a glass of warm water. The salt curbs the bacterial growth and the warm water soothes the inflamed areas and lowers the chances of infection. Use this rinse a minimum of three to four times a day for optimum benefits.

Studies suggest rinsing with ACV can bring down the inflammation of gums and impede the formation of plaque. To prepare an ACV rinse, add one tablespoon of ACV to a cup of water. Swish the antimicrobial rinse inside your mouth and then rinse with water at least two or three times a day.

Oil pulling is an Ayurvedic procedure for oral hygiene maintenance. In this procedure, you hold a comfortable amount of oil inside the mouth and swish it for a few minutes until the oil turns milky and thin. Then you spit it out. Coconut oil may be best for oil pulling as it contains a high percentage of lauric acid, which has antimicrobial and anti-inflammatory properties. When performed as above, research suggests oil pulling can complement good tooth brushing and flossing.

How to Prevent Bleeding Gums

Use these proven methods to keep your gum tissue healthy.

Brush twice a day with a toothpaste that includes fluoride

Brushing is essential to curb the formation of the plaque layer and prevent the hardening of plaque into tartar. Fluoride toothpaste protects your teeth from dental decay. Use a soft-bristled toothbrush to avoid injury to your gums and abrasion of teeth. Hold the brush at a 45-degree angle to your gum line and move the brush back and forth gently while brushing the inner, outer, and chewing surfaces of every tooth.

Studies suggest some oral rinses can reduce dental plaque and prevent gum inflammation. Look for a mouthwash that’s backed by research and designed to help prevent and treat bleeding gums.

Use floss or interdental brushes to clean between teeth 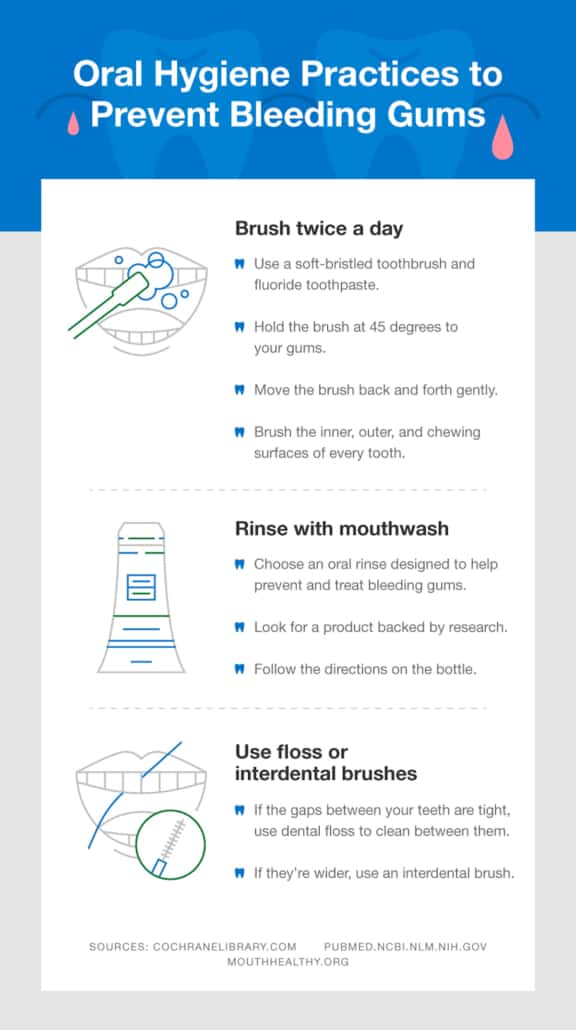 How to Get Rid of Bad Breath and Bleeding Gums

You may be wondering how to get rid of bad breath and bleeding gums. As with bleeding gums, gum disease may be to blame for your bad breath. However, other health problems such as gastroesophageal reflux disease (GERD) or sinus infections can cause bad breath, too.

Whether you’re worried about bad breath, bleeding gums, or other annoying oral issues, schedule a consultation with your dentist and dental hygienist to help you determine the cause. They can assess whether you have any signs of gum disease. If you do, use their recommendations and the tips above to help you get on the path to better oral health.

What Is Gingivitis and How to Treat It